Stamper Roofing & Construction has been offering roof repair, commercial roof repair, and residential roof repair in the Coppell since 1997. We are a family-owned and operated business. We are Roofing Insurance Claims Specialists that have maintained an A+ rating with the Better Business Bureau since its inception. We only deliver the best quality of workmanship and materials. We offer Full Warranty Protection Coverage on your new Roof and we only Hand Nail your new roof during installation. 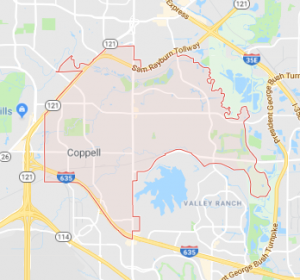 Coppell is a city in the northwest corner of Dallas County in the U.S. state of Texas. It is a suburb of Dallas and a bedroom community in the Dallas–Fort Worth metroplex. The population was 38,659 at the 2010 census. A small area in the far northern portion of the city extends into neighboring Denton County.

The Coppell area was settled by German and French immigrants in the 1840s. Members of the Peters Colony also settled here in the 1840s. Originally named “Gibbs Station,” after Barnett Gibbs (who eventually became one of Texas’ first lieutenant governors), the town was renamed in 1892 for George Coppell, a wealthy financier from England who came to the United States in the 1880s and was reportedly heavily involved with the final construction of the local railroad line. The popular belief is that he was an engineer. However, there is little or no evidence to support that claim.[6]

In 1955, the community was incorporated through a ballot measure that passed by a vote of 41 to 1. Spurred by the opening of Dallas/Fort Worth International Airport in 1974, the city was radically transformed from a tiny farming village to a large, upper-middle-class suburban community in the 1980s and 1990s. By 2000, almost all of the residentially zoned land in the city was developed, and the population grew to over 35,000. In addition to suburban homes, the city has a growing commercial base of warehouses and transportation centers on the south and west sides of the city, closest in proximity to the DFW airport.

Things to do in Coppell